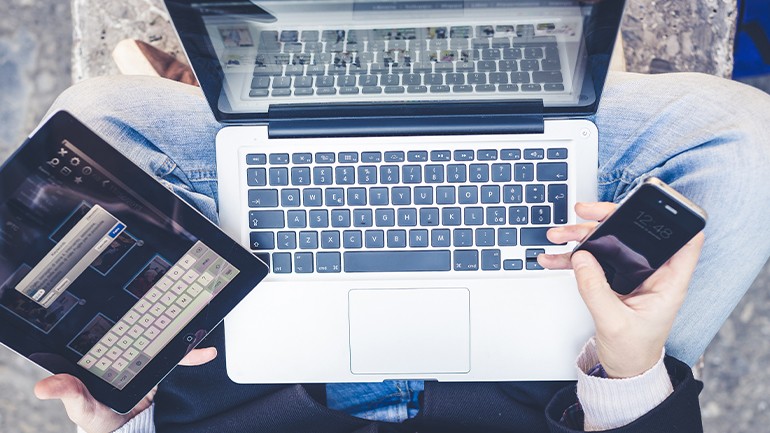 Okay first things first: most readers of this blog post are probably already asking themselves, “What’s a PWA?” The buzz around PWAs or “Progressive Web Apps” has been building since designer Frances Berriman and Google Chrome engineer Alex Russell coined the term back in 2015. These mobile apps that progressively load and run in a web browser promise to blur the lines between native apps and the mobile web by bringing (almost) all the advantages of native mobile apps to the mobile browser.

PWAS SOLVE TWO PROBLEMS AT ONCE

To understand why PWAs are important we must take a closer look at the state of the mobile web today. According to Forrester and Shop.org, average conversion rates on native mobile apps are 6%, on desktop 4.2%, while the mobile web lags behind at only 2.3%[1].

What we can conclude from these stats is that well-designed and well-built native mobile apps (think Amazon) provide such a fantastic and frictionless shopping experience that they provide a superior digital shopping experience to the venerable desktop. The problem, however, is that mobile apps are a) very expensive to build and maintain and b) consumers only download and use apps from brands with which they have regular interactions. Native apps, therefore, are great for enterprise organizations with seven figure mobile development budgets, mature loyalty programs or customers that engage and purchase multiple times a month, but for the average merchant, a native app strategy rarely makes commercial sense.

This is where PWAs play their trump card: the ability to deliver blazingly fast and slick “app-like” experiences in the mobile web browser using open web technologies. It is an intriguing proposition for online merchants faced with an existential shift of traffic from desktop to mobile devices. PWAs promise to solve two problems at once. They offer improved performance and usability (vs a traditional responsive mobile site), thus promise to have a big impact on mobile web conversion rates while also alleviating the need for merchants to invest in developing expensive native apps.

So, now that we’ve covered the “why” let’s take a closer look at what PWAs are and how they differ from existing responsive web design (RWD) sites that dominate the mobile web today. It’s key to remember that PWAs are an evolution of open web technologies. Unlike native apps that require a different development skillset from the web, PWAs are built 100% using JavaScript, HTML, and CSS. The secret behind PWAs lies in a new set of API’s that have been recently added into web browsers themselves called “Service Workers”. Service Workers allow JavaScript to run in the background of the PWA and process important functions such as predictively pre-loading content, sending push notifications and synchronizing and receiving data. Effectively Service Workers empower developers to build app-like capabilities using open web technologies. This means that mobile web users now get to experience:

PWAs mean more mobile visitors, usage, and better conversions. What’s the catch? While there have been some concerns about ubiquitous browser support, SEO rankings, and support on desktop, these perceived drawbacks are quickly being addressed which means that PWAs are:

Magento believes that PWAs represents a seismic advancement in the web, similar in magnitude to the transition that happened five years ago from conventional desktop sites to responsive web design (RWD) sites. We know however that this is not a small change and that Magento merchants and our solution partners will need help making this migration. That’s why at Magento we are collaborating with Google and our broader community to develop the Magento PWA Studio—a suite of tools for building online stores as Progressive Web Applications. I strongly recommend to all our merchants to:

PWAs are an exciting journey for Magento, our merchants, and our partners. Stay tuned for more information throughout the remainder of 2017.